Sustainable and impact investing has seen tremendous growth in the last decade—a market estimated now to have over $30 trillion in AUM globally – which is quite a transformation from 2007 when the term “impact investing” was coined by a group of visionary investors and entrepreneurs at the Rockefeller Foundation’s Conference Center in Italy. Fueling this momentum has been the growing view that the unfettered pursuit of profit and the mantra of “shareholder primacy” are no longer acceptable, and that purpose and profit should be more strongly linked. Further, it has become increasingly clear to investors, business leaders and policymakers that neither business nor the financial markets can outrun the growing number of social and environmental risks.

On Friday, March 12th, join WAFFA for a conversation with Judith Rodin on her new book, Making Money Moral and learn about the ambitious innovators who are unlocking private-sector investments in new ways to solve global problems, from environmental challenges to social issues such as poverty and inequality. This talk is designed for those seeking private-sector capital to address a big problem, as well as those seeking both to mitigate risk and to invest in big solutions.

Judith Rodin is a pioneer, innovator, change-maker, and global thought-leader. For over two decades, Dr. Rodin led and transformed two global institutions: The University of Pennsylvania and The Rockefeller Foundation. Her leadership at Rockefeller ushered in a new era of strategic philanthropy that emphasized large-scale partnerships with business and government to address and solve for the complex challenges of the 21st century, and championed two new fields that are at the forefront of current thinking: resilience and impact investing. Dr. Rodin has served as a board member of nine leading public companies, including Citigroup, Comcast and Aetna, as well as numerous venture-capital backed startups, and nonprofits including The Brookings Institution. She has been the recipient of 19 honorary doctorate degrees, numerous prestigious honors, and is a sought-after speaker for influential global forums including The World Economic Forum, the United Nations General Assembly and the Vatican Global Forum. Dr. Rodin has authored more than 200 academic articles and chapters, and has written or co-written 15 books, including The Power of Impact Investing: Putting Markets to Work for Profit and Global Good and The Resilience Dividend: Being Strong in a World Where Things Go Wrong. Her latest book, released in early 2021 by Wharton School Press, is entitled Making Money Moral: How a New Wave of Visionaries is Linking Purpose and Profit. 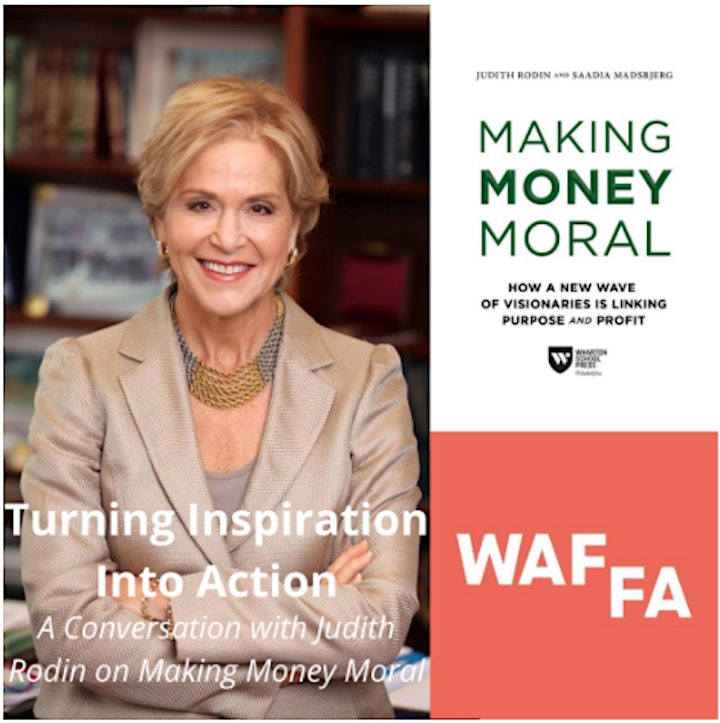